It seems that the world created in The Star Wars has never-ending stories. Even though some viewers are tired of its prequels and sequences, almost nobody can ignore any adventure related to that fantastic fiction world. Maybe that is the reason The Mandalorian attracted a vast number of viewers.

The Mandalorian sets up in the unique world of George Lucas with its diverse species and planets. Some of the characters like the robot IG-11, Vader, Yoda, Jedi, etc. are borrowed directly from The Star Wars. With all these mutual elements, The Mandalorian has a different atmosphere, and its storyline focuses on a different motif.

The Mandalorians are a secretive creed with outstanding martial arts expertise and specific moral codes. But the Mandalorian we follow in the series is a lone bounty hunter. He doesn’t follow any moral code or creed’s way at the beginning of the series. He is an outsider as one Mandalorian accuses him of working for The Empire as a bounty hunter. His connection to the creed is just an armour and a slogan whenever he meets other creed members and says: This is the way.

He reminds me of Characters like Blondie played by Clint Eastwood in The Good, the Bad and the Ugly created by Sergio Leone. A lone bounty hunter who doesn’t seem to have any morality until he has to make vital decisions about others’ lives.

The Mandalorian also reminds me of lone samurais like Yojimbo (1961) by Akira Kurosawa. Yojimbo is a lone ronin that accepts to get money to kill members of a gang in a city. It looks like the money is the only thing that matters to him initially, but later on, he shows his real face by planning to kill all gang members who rule in the town.

All these characters show their hidden moral conflicts and their tendency to the right side when it comes to making important decisions. In this case, The Mandalorian can’t accept to deliver the hunted Baby Yoda to the Empire when he learns that they may kill or perform experiments on him to discover his superpowers.

The mutuality of motifs and characters are not a coincidence. Jon Favreau, the creator of The Mandalorian, not only had these movies in his mind but also he advised Pedro Pascal, who plays the role of Mandalorian to watch Yojimbo and The Good, the Bad and the Ugly for getting closer to the character he plays.

In his interview with Disney Plus, Pedro Pascal says: “Talking to John, I asked him what I should be looking at? I know he loves movies. I love movies. What would you like me to watch? I asked him. And he immediately brought up Sergio Leone and Akira Kurosawa; Yojimbo and The Good, the Bad and the Ugly. He (The Mandalorian) is very samurai, Clint, and me. He just wedged me to those two iconic characters.”

With all these similarities in developing the characters, the Mandalorian still is not as human as Yojimbo or Blondie in those classic movies. A part of that relates to the helmet and armor that covered all over his body. Jon Favreau tried to make the Mandalorian more humane by his actions and commitments; still, it is difficult to show it with a no-face character covered in a metal helmet.

Besides the helmet, the advanced technology of his weapons is also distancing him from the human level. Kurosawa’s Yojimbo (and Ringo in A Fistful of Dollars -1964) used only an iron plate to survive shots by rifle, and despite his mastery with the sword, he is still a human that can be beaten. But the Mandalorian is more like James Bond in the space with a full collection of unique weapons and gadgets.

On the other hand, The Mandalorian is more realistic than The Star Wars. Characters don’t have superpowers, and besides Baby Yoda, who rarely uses his power to move objects, all characters have ordinary abilities. This approach makes the series more acceptable for a mature audience who finds the superpowers of Star Wars characters meaningless and unacceptable. 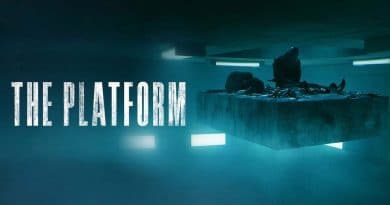 The Platform; A Sacrifice for Future

OUT OF THE BOX

For those who are tired of never-ending sequences of Star Wars and prefer to watch a more intelligent sci-fi series, Raised by Wolves is a great choice. A remarkable show that may not be easy-digestion for those who still follow fairy tales of Star Wars.